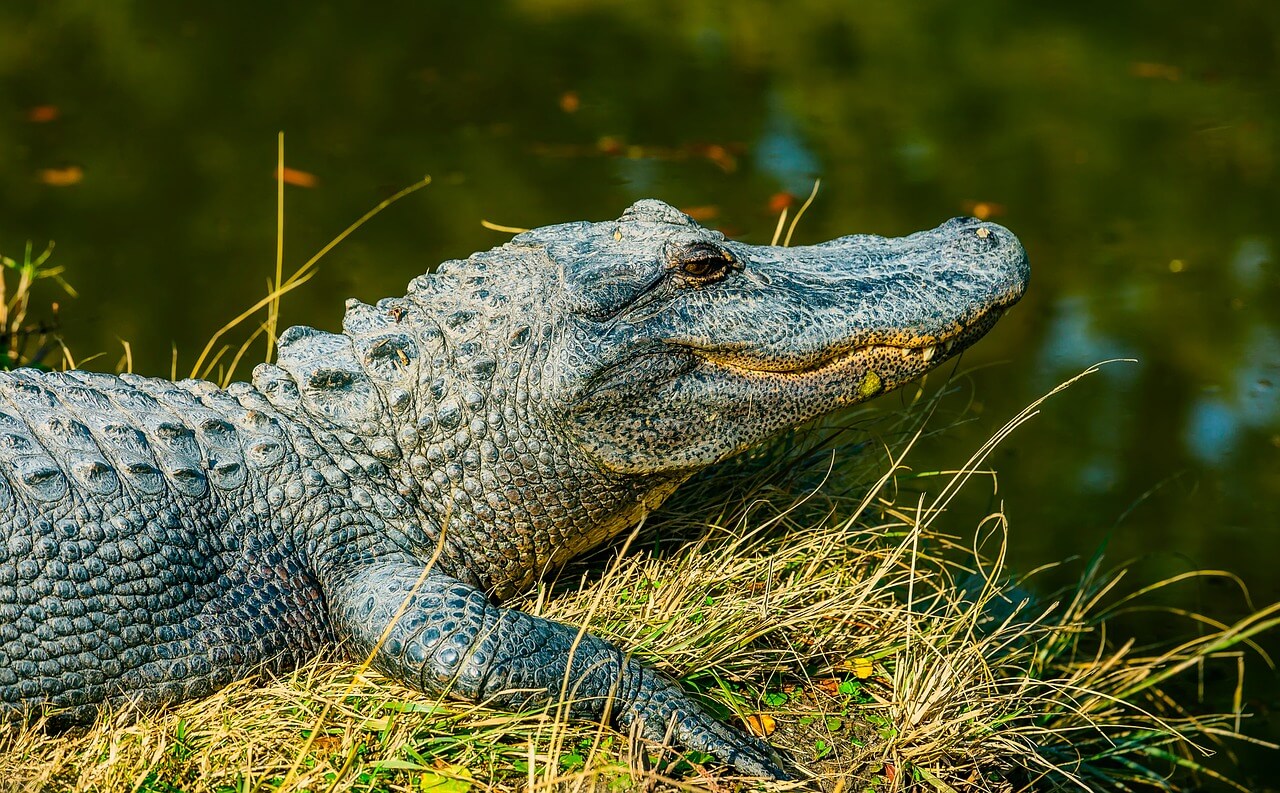 Alligators are exploited for entertainment at numerous restaurants, mini-golf courses, and other businesses. The conditions for animals at such venues are typically appalling: Alligators are often kept in cramped or crowded enclosures with dirty pools. Many facilities allow dangerous feeding encounters with the public or photo ops with young alligators whose mouths are taped shut. Some even offer shows featuring alligator wrestling, even though alligators shun contact with humans and would rather flee than fight.

PETA frequently receives complaints about facilities that offer alligator “attractions” from whistleblowers who are appalled by the poor conditions in which the animals are kept.

Alligator Facts: See These Animals in a Whole New Light

These ancient reptiles may have a toothy reputation, but underneath their scaly exterior, alligators lead rich, fascinating lives. Resourceful animals, they communicate using a variety of bellows, growls, hisses, and roars. Alligators can also use tools. When hunting, they’ve been observed cleverly balancing sticks on their heads to attract birds looking for nesting material.

Alligators are extremely dedicated mothers. A female alligator builds a nest for her eggs and guards it constantly during a 65-day incubation period. The babies make high-pitched noises from their eggs when they’re ready to come out, and she gently carries them to water in her jaws so they can hatch. She will protect and care for her pod of hatchlings for up to two years.

Alligators can live for up to 50 years. They continue growing throughout their long lives and can reach a weight of more than 1,000 pounds. Young alligators can eat the equivalent of about 28% of their bodyweight in one sitting.

With strong tails and webbed feet to help them glide through rivers and marshes, they’re meant for life in the water. As aquatic animals, they can swim great distances in their natural environment.

But when they’re used as sideshow attractions at roadside zoos and other tourist traps, they’re denied vital opportunities to exercise properly and express many types of basic behavior. Alligators are sensitive and feel pain just as humans do. And like all animals, they also experience anxiety, fear, distress, frustration, and suffering.

This restaurant keeps multiple alligators in an enclosure known as “Big Jack’s Gator Park,” where visitors can participate in photo ops with baby alligators whose mouths are taped shut.

In nature, baby alligators would have the protection of their mother to defend them from predators for the first couple of years, but these young alligators have been taken from their mothers and forced into traumatic encounters with humans. Because even a young alligator can easily injure a human with their sharp teeth, their jaws are taped shut, which renders these babies completely defenseless and makes them more vulnerable to severe stress.

This restaurant—which serves dead alligators on its menu—keeps one live alligator, named Miss Evangeline, captive in a small enclosure. According to a Facebook post, Idaho Falls Animal Control officials gave the animal to the restaurant more than 15 years ago.

In nature, alligators prefer water features deep enough to submerge themselves and foliage around the water to hide in, but most roadside attractions fail to provide them with these simple features, which are vital to their well-being in captivity.

Visitors can feed live alligators kept in an enclosed outdoor pond at this Georgia restaurant.

Alligators are typically solitary—particularly adult males—but at tourist traps like this one, multiple unfamiliar alligators may be confined to a tiny enclosure together, creating stress in these territorial reptiles.

This souvenir shop keeps a young alligator or a caiman in a small tank enclosure.

Visitor reviews say it all: 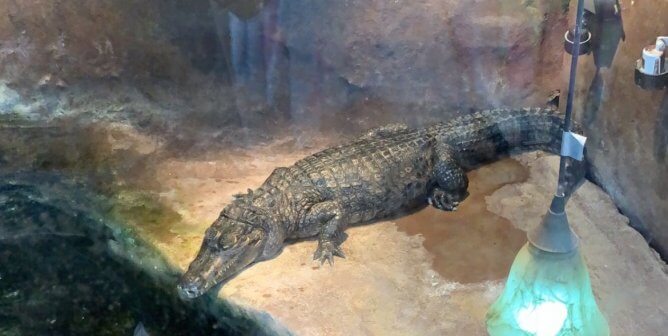 Each location of this mini-golf course holds 20 to 30 alligators visitors can feed with a fishing pole.

Feeding groups of alligators like this has the potential to cause aggressive competition between individuals, which could lead to serious injuries.

Visitors to this Florida mini-golf chain can feed alligators with a fishing pole and participate in photo ops with baby alligators.

Alligators’ sense of touch is one of the most acute of all the animals in the world. They have a concentrated collection of touch sensors around their face and jaws that are more sensitive to pressure and vibration than human fingertips and help them detect prey, manipulate objects in their mouths, and carry their hatchlings in their mouth without injuring them. Forcing these sensitive animals to be handled by humans can cause them excessive stress.

This mini-golf business hosts live shows in which alligators are fed or wrestled and restrained by humans for entertainment. Visitors can also feed or participate in photo ops with alligators.

When humans roughly handle or wrestle alligators—including restraining them, flipping them on their back, and even just approaching and touching them—it not only causes stress to these shy animals but also puts them at risk of injury. Forcing them into unnatural positions that twist or flex the spine can result in pain and injury to the vertebral column, spinal cord, and associated nerves, joints, muscles, or other tissues. Excessive struggling is typical when humans attempt to handle and wrestle alligators, which can trigger a buildup of lactic acid in the body and lead to death, particularly with large alligators. When humans sit on large alligators, it can restrict their ability to breathe, depriving their organs of oxygen and preventing their body from functioning properly. Studies have found that it can take up to eight hours for an alligator’s blood stress levels to decrease after being physically restrained for just a couple of minutes. 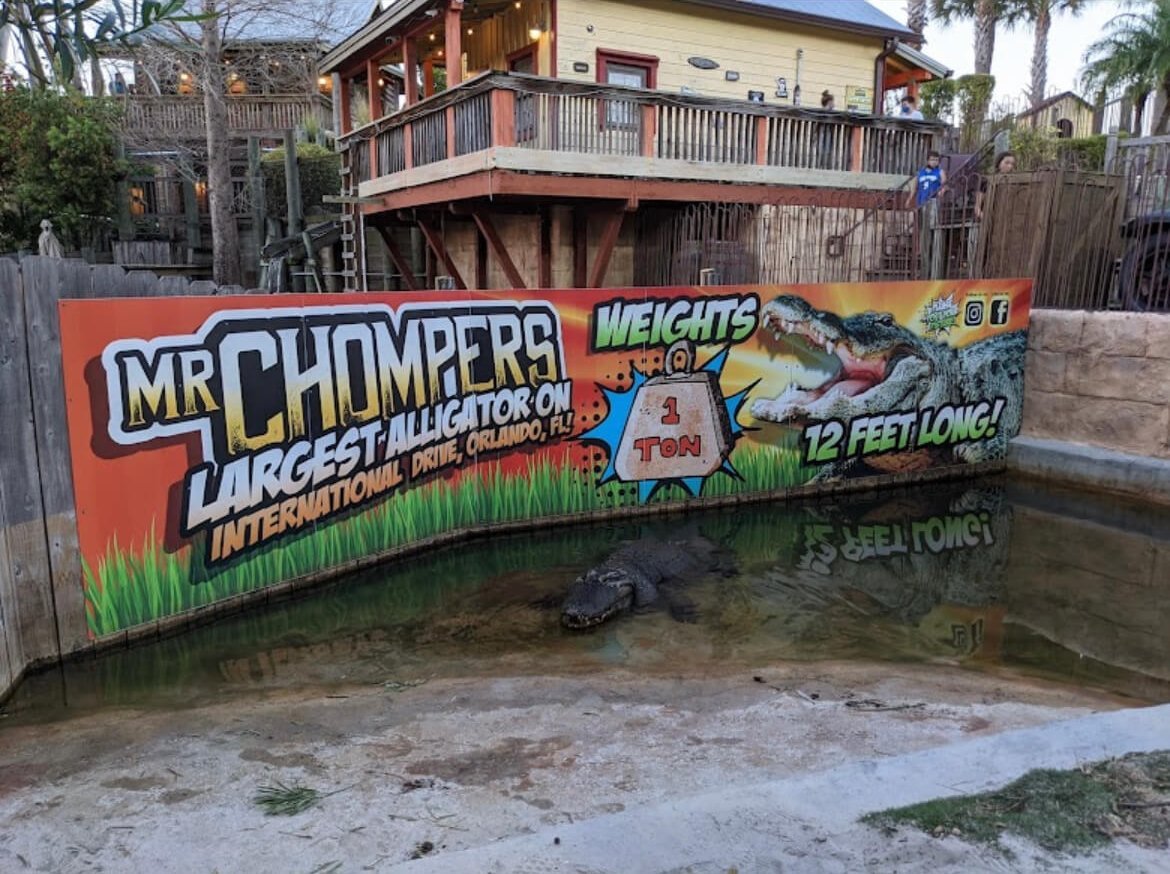 Visitors to this Florida business can feed adult alligators and hold or touch various reptiles during photo ops.

Handling any reptile can expose humans to zoonotic diseases and bacteria, including salmonella.

Gatorland allows humans to wrestle alligators and has a history of U.S. Department of Agriculture citations for federal Animal Welfare Act (AWA) violations, including for its failure to provide animals with adequate veterinary care as well as for dirty feeding receptacles, unsafe public feeding, and enclosures that were in disrepair. However, reptiles (including alligators) are exempt from even the minimal protections offered by the AWA.

What You Can Do to Help Alligators

Avoid roadside attractions that exploit alligators and other animals. Encourage your friends, family members, and social media followers to do the same. And remember: Wild animals aren’t selfie props. If you see an alligator in his or her natural habitat, keep your distance. If there’s any risk that your photo is going to hurt or cause stress to an alligator—or endanger you or your animal companion—it’s not worth it.

PETA Scientists Use Webinars to Help End Testing on Animals