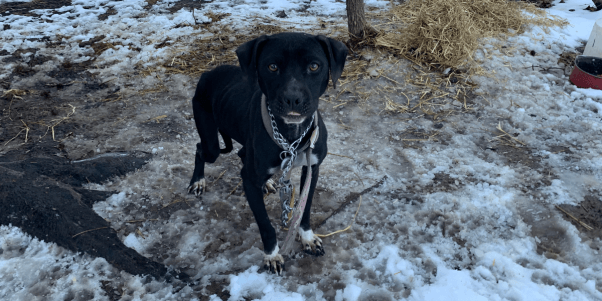 PETA fieldworkers found Minnie’s remains, still chained to a nearby tree, inside a doghouse in North Carolina. Neither she, a young dog who was kept chained outside her entire life, nor the five surviving dogs chained and/or penned around the property had any food or drinkable water within reach. Now, the survivors are safe and indoors with PETA, and their former owner is facing seven counts of cruelty to animals.

Minnie, before her death

PETA fieldworkers visited the dogs many times over a span of months and even secured custody of Buddy (now Henry), a malnourished Chihuahua who was kept chained 24/7 in all weather extremes.

Buddy was malnourished and chained outside 24/7 when PETA rescued him. Now he’s living large with his new adoptive family.

On other visits, fieldworkers provided the dogs’ owner with free food, spay/neuter services, doghouses, flea and flystrike prevention, lightweight cable tie-outs to replace heavy chains, nylon collars to replace choker chains, and more. Despite all our efforts, whenever we checked on the dogs, they appeared malnourished and were thirsty and famished and desperate for attention—and one of the dogs, a husky, was severely matted, even in temperatures of more than 90 degrees.

After many months of pleading and urging by PETA, the Bertie County Sheriff’s Office finally removed four surviving dogs: Zeus (whose ears are permanently disfigured from years of flystrike), Duke, Sandy, and Duchess—all of whom were housed at the county shelter pending the outcome of the criminal case. PETA then sued the dogs’ owner for custody under a civil statute, and on August 15, a judge granted us temporary custody of the four dogs in addition to a young puppy we named Billie, who was acquired after Minnie’s death and kept chained outside. All five dogs are now indoors—maybe for the first time in their lives—where PETA staffers are giving them individual attention and appropriate care for various ailments in air-conditioned guest rooms with soft bedding and toys.

The trial for permanent custody of the dogs is expected to take place in September.

Report Cruelty to Animals: If You See Something, Say Something

Dogs left outside without proper care or adequate shelter can suffer from dehydration and hyperthermia—and in winter, they can get frostbite or even freeze to death. They should never be left outside in the first place, but when they’re outside and deprived of access to water or shelter, the situation can quickly become an emergency. Their well-being, if not their life, could depend on you. Check out current legislation on tethering dogs in your area, find out how you can help get continuous chaining banned in your community, and check out these tips to help chained dogs:

‘Dying of Thirst? So Is Your Dog’: New Hot-Weather Danger Alerts Go Up