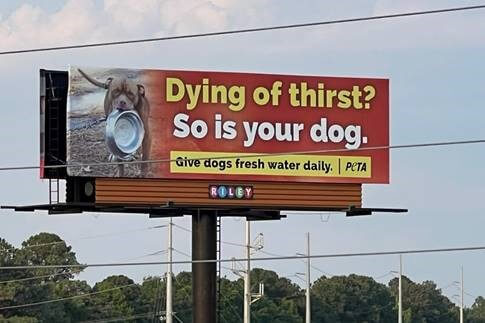 Raleigh, N.C. – Summer’s scorching temperatures pose a deadly danger to dogs kept chained or penned outdoors 24/7—and since many people don’t realize that water can mean the difference between life and death for dogs, PETA has launched a multimedia messaging blitz: Don’t let your pup be the next casualty of a bone-dry water bowl. PETA’s sky-high alerts, convenience store displays, and radio spots will be running across the region to urge everyone to make sure dogs have plenty of water.

“Dogs must have access to clean, cool water throughout the day, and they can get sick and even die without it,” says PETA Senior Vice President Daphna Nachminovitch. “PETA urges everyone to provide dogs with fresh water daily, let them live indoors as members of the family, and call law enforcement if they see a dog who might be in distress.”

Every year, PETA’s rescue team finds dead or dying dogs, many confined to pens and/or with heavy chains around their necks. Dogs kept penned or chained outdoors often go without adequate food, water, shelter, and veterinary care and are limited to the same few square feet of space day in and day out. Last summer, PETA fieldworkers found a Halifax County dog named Star dead at the end of a chain, without a drop of water or any shade (graphic images here). That’s why PETA urges everyone to keep dogs indoors and lobbies for animal protection laws, such as North Carolina’s HB 1116 (Fiona Mae Wagglebottom’s Act), which would prohibit keeping dogs tethered outside during extreme weather, including when temperatures are below 32 or above 85 degrees.

PETA’s billboards have just gone up in the following locations:

PETA’s radio spots about dogs will be running throughout the state, and the group has placed ads in convenience stores in Bertie, Halifax, Hertford, Nash, and Pitt counties.

PETA—whose motto reads, in part, that “animals are not ours to abuse in any way” and which opposes speciesism, a human-supremacist worldview—urges anyone who witnesses an animal being neglected to contact local law enforcement immediately. For more information on PETA’s investigative newsgathering and reporting, please visit PETA.org or follow the group on Twitter, Facebook, or Instagram.

10 Things to Know About Keeping a Gerbil as a Pet

‘Hell on Wheels’ Is Coming: Squawking Chicken Truck to Ruffle Feathers Near Capitol