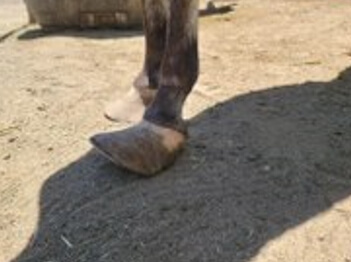 On an average day, PETA’s Cruelty Investigations Department (CID) receives dozens of phone calls from caring individuals reporting cases of animal abuse. When an animal is in trouble, caseworkers fly into action. Able to leap great obstacles for a single hound, we help fight injustice, collar bad guys, and rescue animals in distress.

In an average week, CID caseworkers process more than 300 reports of cruelty. Here are just a few of the many animals we helped this summer:

We worked with authorities to ensure that two horses’ severely overgrown hooves got trimmed. The horses will be moved to a more suitable location with appropriate shelter from the elements and shade from the hot sun.

To help a dog kept in a filthy pen without shade and often without water, we worked relentlessly with local officials until he was seized and his owner was charged with cruelty.

When our caller found a nestling covered with ants on a hiking trail, with no nest or parents in sight, we helped get the little fellow to a wildlife center for care.

A PETA staffer transported an injured hawk to a wildlife center after a college security guard alerted us to the flightless bird.

When an orphaned heron was dropped off at our Los Angeles office, a PETA staffer rushed her to a wildlife center, where she was cared for.

Finding a Safe New Home for Jaxx the Donkey—Arkansas

PETA secured the rescue of a limping donkey roaming at large. We worked with a stellar activist to get veterinary care and a good home for the newly named Jaxx, who is beloved by his new guardian.

Neglected German Shepherd Gets a New Leash on Life—Indiana

We teamed up with a caller from Indiana to secure the surrender of a horribly neglected German shepherd. A PETA staffer and his wife have since adopted Mona, and she’s thriving in her new home.

After finding a gravely ailing juvenile raccoon in the street, a PETA staffer expedited the animal’s transport to a wildlife rehabilitator for assessment.

A caller found a severely injured snapping turtle, and we arranged his transportation to a rehabilitation center.

These cases—just a small sampling of CID’s nonstop efforts for animals everywhere—are a reminder of why it’s vital to report cruelty to animals immediately.

PETA needs your help to prevent other animals from meeting a similar fate.

Keep your eyes open for animals in need, be a nosy neighbor, trust your instincts, and always alert police or animal control officials right away if you know or suspect that animals are being abused or neglected.

Dove or Pigeon, what the heck are you?

‘Hell on Wheels’ Is Coming: Squawking Chicken Truck to Ruffle Feathers at Oktoberfest

Hamsters Kept in Complete Darkness in UMass Lab for Over 200 Days: PETA Statement