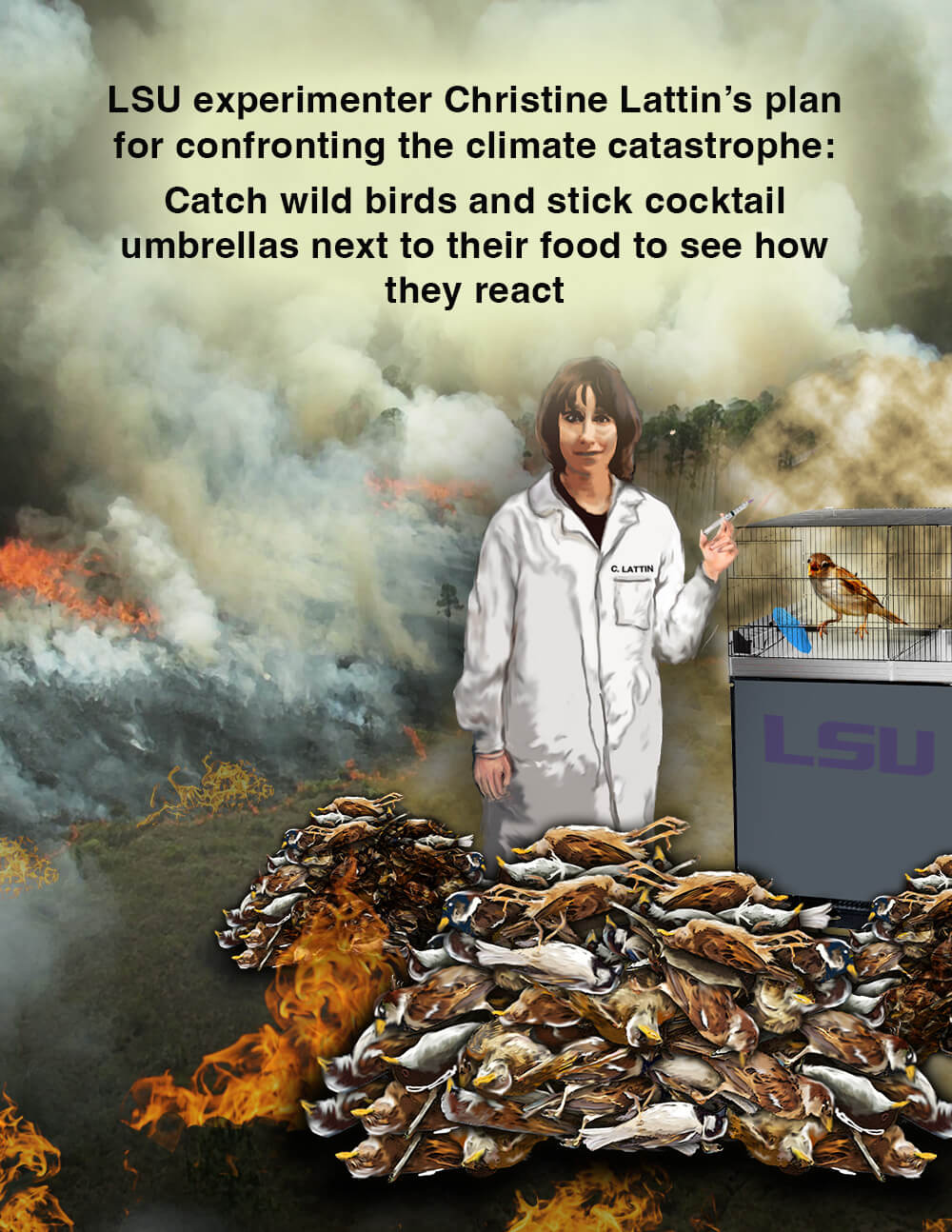 The West Coast is burning, ice caps are melting, once-expansive rainforests are shrinking, and hurricanes are pummeling our coastal cities more violently than ever before. What’s Louisiana State University (LSU) experimenter Christine Lattin’s plan to confront the climate catastrophe? Plopping cocktail umbrellas and pink puffs in front of hungry, traumatized sparrows to see what happens.

While real scientists analyze samples of ice and soil, run complex computer simulations, and observe animals without interference in their natural habitat, Lattin dithers away in her laboratory, adding more small bodies to the ever-growing mountain of carcasses she has accumulated in more than a decade of grisly experimentation. She claims that her ongoing reign of terror will somehow yield information relevant to addressing the climate catastrophe and other human-caused environmental challenges. Although state and federal governments have produced book-length treatises on how to confront these critical issues, her strategy is simple:

Christine Lattin’s other strategies for tackling urgent ecological problems have included terrifying nesting pairs and their babies with recorded predator sounds, stuffing birds into bags, forcing them to eat crude oil, rolling them on a cart so they couldn’t perch, rattling their cages, blasting a radio in the animal room, cutting chunks out of their legs, and ripping out their feathers.

To the surprise of no one, the planet is still in deep trouble.

Lattin’s spectacular fusion of absurdity, cruelty, and violence may be a foolproof strategy for generating more misery in the world, but it’s hardly a promising methodology for understanding how animals respond to stressors in their environment—many of which are brought on or exacerbated by the climate catastrophe—as she claims. Sparrows and starlings are physiologically distinct from other animals in ways that make the results of her experiments inapplicable to humans and other species.

If Lattin sincerely wants to address the climate catastrophe with her research, she need not try to simulate its effects in her laboratory by kidnapping and traumatizing unwilling victims. The climate catastrophe is here now—and the suffering it creates can already be studied in various ways in nature. There’s simply no excuse for causing more.

Throughout her career, Christine Lattin has captured, terrorized, and killed hundreds, perhaps thousands, of vulnerable birds for experiments with little or no relevance to humans or other species. The philosophy that undergirds her experiments—that it’s acceptable to harm other animals, deny them control over their own lives, and even kill them for the slightest possibility of a benefit to humans—is called speciesism. And it’s a big part of what got us into the climate catastrophe in the first place.

Speciesism fuels many of humans’ most environmentally ruinous practices. We destroy the rainforest for a hamburger, poison the water for a handbag, and decimate native species for worthless data. If animals have something humans want, we take it—their home (our home!) be damned.

Scaring sparrows with yellow pipe cleaners and blinking lights won’t help fix the total mess we’ve created. A change in our attitudes and behavior toward our fellow earthlings, however, will.

Take action now to urge LSU to strike at the root of the climate catastrophe by ending Lattin’s speciesist experiments.

Chewing and Destructive Behavior in Dogs

6 Dogs that Get Along with Cats – Union Lake Pet Services